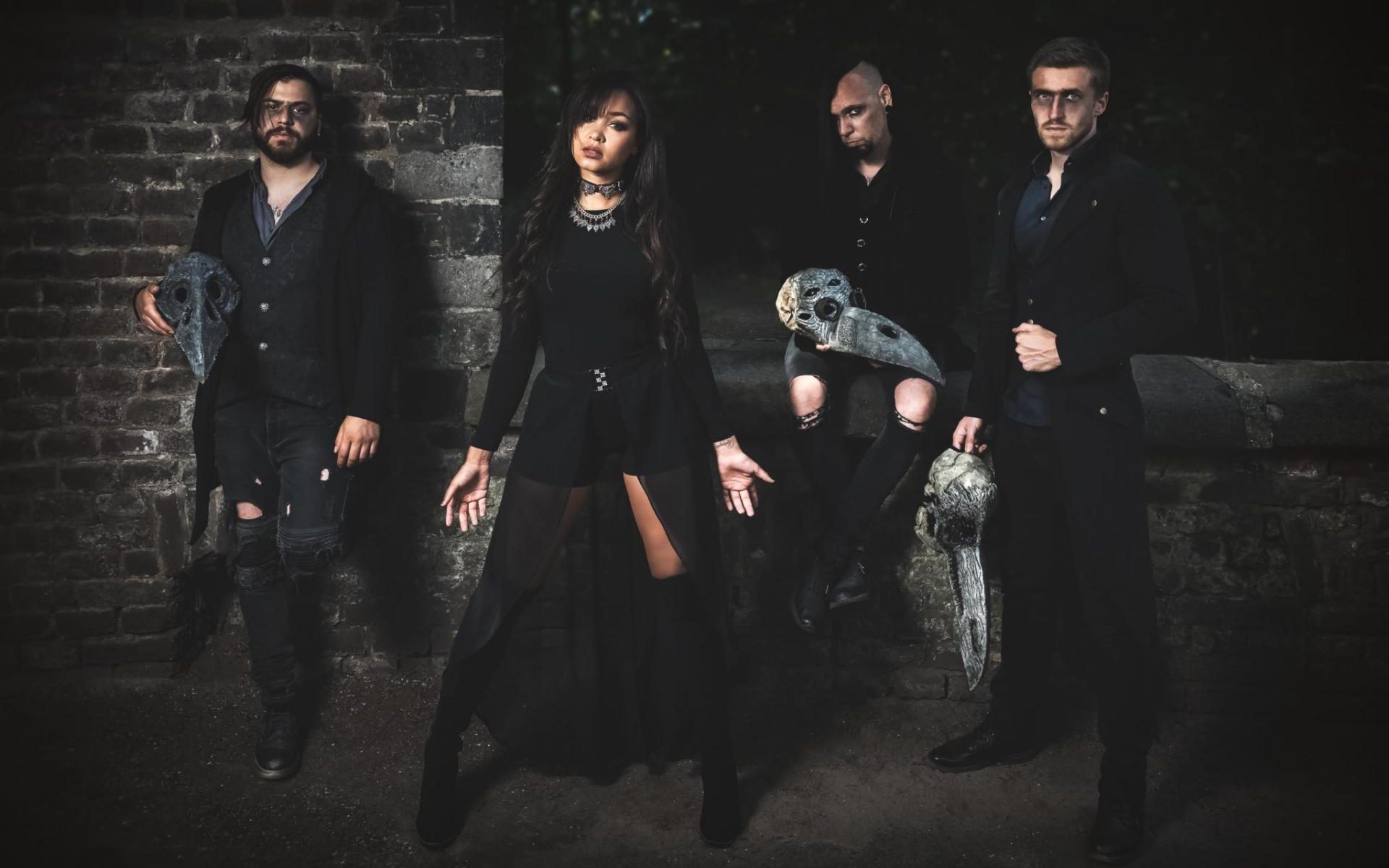 Ad Infinitum are a band that skyrocketed to the top of my favourite bands after hearing just one single from their debut album, namely “Marching on Versailles”. It was everything I wanted in a song or band I just didn’t know it yet. When they followed that with “See You in Hell”, I was absolutely sold. Their album “Chapter I: Monarchy” was released in April and if you haven’t checked it out yet, what are you waiting for?

One of my biggest regrets with this pandemic is that I couldn’t see them live this year. However, they kept super busy and managed to give us new and new content, including a new acoustic album “Chapter I Revisited”, to be released December 4th. We had already heard 2 songs in acoustic version from the Deluxe edition of the first album and they are worth all the praise, so an acoustic album is exciting and very appreciated.

To tell you more about everything they have been up to and particularly the upcoming album, we had the chance to talk to Melissa Bonny, frontwoman of the band.

Melissa: The greatest challenge was to actually find the sound of the album both for the electric version and the acoustic version, because, you know, it’s our first album, the band is just starting and it’s really important to find the right direction. And then when we adapted the album to make it acoustic, it was not just about taking the guitar and singing the same songs. It was really about creating a new atmosphere so that people who already know the album can still rediscover those songs differently.

Q: I saw that you that your favourite reinterpretation was Fire and Ice. After listening to the acoustic version, I could tell why. It had such nice effects added to it.

Melissa: Thank you. Yeah, I think it was my favourite to readapt because I’ve created some different vocal lines that I liked a lot. And it was already one of my favourite tracks. It was the very first song that we finished. So it’s something special for me because when I was working on the original version with Oliver Phillip, it was the first one he worked on with the orchestrations and when the demos came to life and actually became real songs. And that was a very first one. I remember this this feeling very well.

Q: I could hear a lot of flamenco influences on the new tracks. Is that simply because flamenco is traditionally acoustic or is there more to it?

Melissa: Oh, it’s because Adrian is just very good guitar player and he spends a lot of time adopting those songs and putting all his knowledge into it, both with acoustic guitars, classical guitars and electric guitars. He did a lot of things, you know, he replaced the whole orchestration parts with guitars, and he had so many tracks. He’s just a brilliant musician who can do anything.

Melissa: I think it will really depend on how much time we have. So far, we haven’t had any opportunity for headliner shows. I don’t know yet in which circumstances we will be able to have both electric and acoustic songs. But we did this one show in Cologne where we couldn’t have any audience. We just recorded a show to put it on YouTube. So we did an acoustic song which was Tell Me Why.

Q: We obviously know all the ways this year and lockdown has been bad, but what is one good thing about this whole period for Ad Infinitum? Other than obviously the new acoustic album

Melissa: The good thing is, I think, that when we realized that we would not be able to tour, probably when the first tour was cancelled, we had to brainstorm and think about other ways to connect with everyone. And the good thing about this is that in the end we created this year six videos, one live show, two albums, and this is probably a much better way to connect with everyone in the world and not just people who would have attended those shows.

Q: Have you been watching any live shows that other bands have been putting out for streaming? How do you feel about them as a viewer, as a fan?

I’ve watched the show of Illumishade and I liked it very much. They created something beautiful, a nice stage, nice songs. They had kind of the same situation as us, because they released their first album this year. And they were not able to tour, I think. I think they played a festival, an online festival, and I’m not sure what else, but they had kind of the same situation. They started their career as a band during the lockdown. So yeah, they did this way before us actually, this live show that they recorded, and it was really well done and loved it.

Q: Hoping that the tour is still happening, it will surely be adjusted with safety precautions. How do you personally feel about going on tour? Even with less transmittable illnesses, once someone got sick on a tour bus, usually everyone got sick.

Melissa: Yeah, that’s right. I don’t know what, actually. I don’t really think about this right now because I assume that when we will be able to tour again, you know, people would have a vaccine and it, the whole planet, it will be safer. I mean, that’s, maybe we will not be allowed to tour if we’re not vaccinated. So I don’t know. I just wait to see how it’s going to be.

Q: In this magical post-corona world where tours do happen, one of my worries is that all the shows and tours within one year will battle for the same slots and there will be a clash there. Is that an actual concern?

Melissa: Oh, yeah. I mean, you, you could see her already this year. When we started to cancel the shows for the beginning of the year, everyone was taking the slots of September, October, or beginning of next year, but mainly September, October. So yeah, I, I fear that people will try to go on tour as soon as we are allowed to.  I guess the fans will have to choose.

Q: On the upcoming tour with Serenity you are a support act and hopefully soon enough we’ll see you on a headline tour as well. What something most people don’t know, I think, is how financially unstable touring is. What would it take for you to have a profitable tour?

Melissa: I would say that we are already very careful with what kind of tours we accept for now and, as you said, we try to only take support tours. Because it’s a good way to get known, to get our name known. And and you know, if we tour with bigger bands, then we can profit of their fans in terms of audience, and then we can hopefully sell a bit of CDs and merchandising. This is something that is interesting for us right now.

Q: Let’s talk about DIY in the music scene. You have obviously been very hands on in every step of the way. How much can you do yourself and be thrifty about?

Melissa: Oh, you can do as much as you can handle with the 24 hours of the day. But yeah, we’ve been doing a lot of things and, you know, we have four band members, but we’re in four different countries. It’s sometimes difficult to just separate the work into four people when it’s like sending shirts, because then it’s a little bit more complicated. We’ve tried to balance it. Like okay, this time it’s Adrian and me; next time, it will be the two others. Or how Nick has been working a lot on the records and now I have more time, so we try to balance it a bit. And so far, it’s works pretty well.

I mean, sometimes it’s definitely a little bit tiring because, you know, we do what other bands have a crew to do, and we have to figure out what’s the best way to do it. Because for example, when it comes to the merchandising we’re not used to handling a shop, so we have to really figure out how to do it, and on top of this, with the pandemic right now, the conditions with the post offices are more complicated. It’s just more small problems that we must figure out. But yeah, I guess, I guess it really depends on how much time you have, how many band members you have, and your motivation.

Q: You have built quite a large community of fans around the band and already have fangroups and fanpages. How do you see the role of fanclubs when it comes to Ad Infinitum and what kind of relationship do they have to the band?

Melissa: We are super thankful, super grateful for all the people following us and supporting us. I see everyday people sharing our content when we have new interviews, it’s shared by the members of the fan club. And it’s so encouraging to see that people are so enthusiastic about our music and it plays a big role for us because it’s really motivates us. You know, when we have a new album to write, we think about how well the first album was received and how much encouragement we’ve received. And, and it’s just, yeah, it’s just this extra motivation that we need sometimes. And also, it plays a big role when, when it comes to spreading the word of what we’re doing, you know?

Q: The pandemic has given us quite a lot of time in a way. What do you do when you’re bored? Maybe something non-musical.

Melissa: I love baking and I also, I mean, baking, cooking, I also like sport a lot. I like to explore the nature or just have nice to walk by the beach. And I like I like a lot of TV series.

Q: Have you watched The Crown?

Melissa: Oh yeah. I’ve watched the two first seasons. And I think that the third one just came out that seen something about this. Yeah.

Q: If I am not mistaken, you recently moved to Denmark.  How is it living in a country with a monarchy?

Melissa: Well, you know, you don’t really feel it because it’s less pronounced than in England, for example, where the Monarchy is very, very much present in the society. Here, from what I’ve experienced, there’s a Queen and I’ve seen her apartments in Copenhagen, but then there’s the vice-presidents in charge of all the official matters. So I would not say that it makes a big difference for me going from Switzerland to Denmark in that sense.

Thank you so much to Melissa for her time and answers and we cannot wait for the new album to hit all the streaming services! Do make sure to listen to it because it’s gonna be a good one!