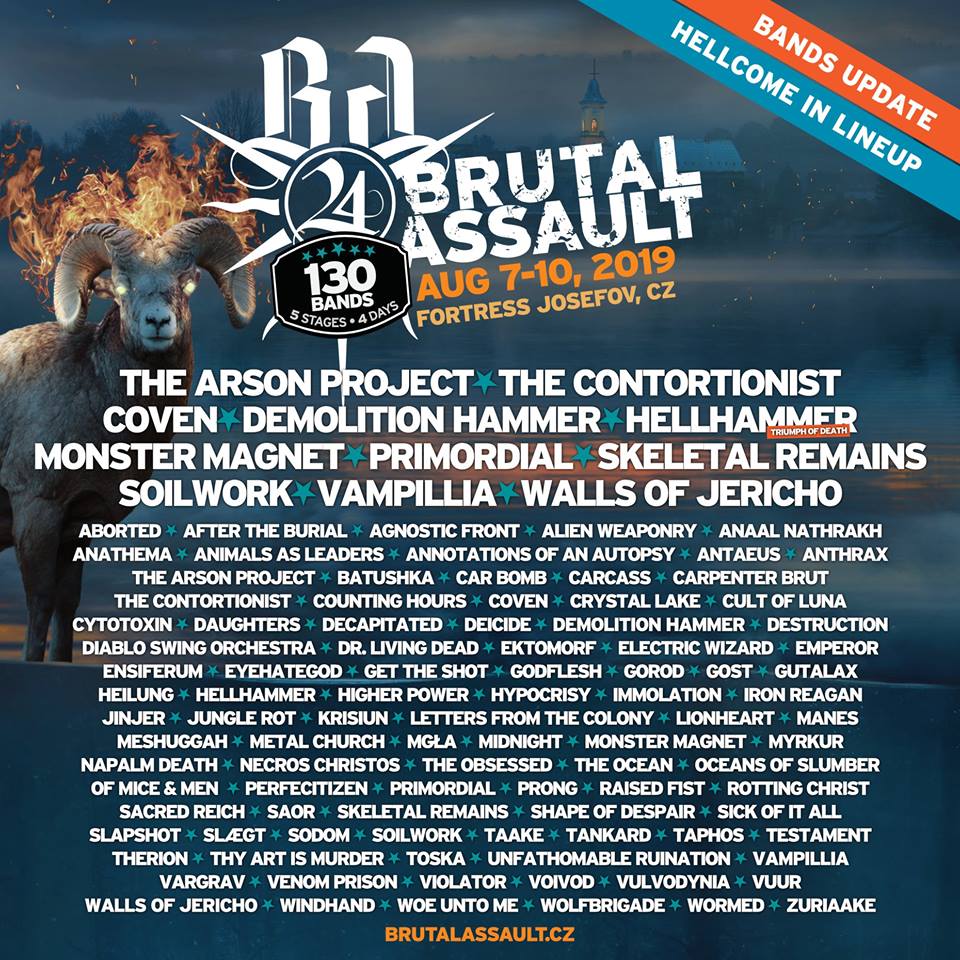 Let’s kick off this band announcement with the well-known metal workaholics! Swedish metal eminence SOILWORK spawned in Helsingborg, anno 1995 by guitarist Peter Wichers and vocalist Björn “Speed” Strid. The band’s unique blend of melodic metal has developed at a staggering rate, most notably with the “Natural Born Chaos”, produced by Devin Townsend. Despite a few line-up shuffles, SOILWORK continues to release strong albums and conquers the fans worldwide, even after 20 years. Now, with the new highly acclaimed album Verligheten, will SOILWORK dominate over the fortress!
In the late 2016, a statement was made about a new album of the Swedish sludge/grindcorers THE ARSON PROJECT, claiming that we were about to witness 23 minutes of straight harsh audio violence. And we got it! Now, this Malmö based quartet will spread filthy tones through their outstanding music full of violence and hatred on Brutal Assault as well.
Dreamy musical landscapes painted by the most delicate nuances. Hills of endless imagination built stone by stone with a gentle talent. THE CONTORTIONIST represents fearlessness in musical expression, designed to please the artist as much as the audience. This band makes progressive metal music, anchored in the heavy sounds that drag the individual players to the stage, yet still unmoored by convention or expectations. There is a time, when you simply need to ease a little, and THE CONTORTIONIST will help to make it happen.
Outstanding, shocking, unbelievable, breathtaking and many more is the Japanese self-called “brutal orchestra” VAMPILLIA. It’s not just a band, it’s something that you have to experience in order to believe it. Each record of this ensemble represents something different, just as their shows do, which you can call an emotional roller-coaster. After their successful tour with Alcest, will Brutal Assault warmly welcome these freaks again in Czech Republic!
Detroit: MI’s WALLS OF JERICHO are not just noteworthy because they are a metalcore band with a screaming female on vocals. They are also worth remembering because they have been adeptly balancing old-school hardcore, thrash metal, and “chugga-chugga” metalcore with a ferocity and dedication unmatched by many of their contemporaries. WOJO became an iron sureness not only on the hardcore field and not just because of their music, but also due to their attitude and distinguished performance full of blasting energy of their front-woman Candace Kucsulain.
2018 marks the twenty-seventh year of PRIMORDIAL’s seminal career, and the return with their ninth full-length Exile Amongst The Ruins, they have lost none of their vitality. Once again building upon their signature sound, the follow up to 2014’s “Where Greater Men Have Fallen” is a more raw, “old school sounding” record than its predecessor. Hitting home, with what vocalist A.A. Nemtheanga describes as “a direct energy” and wielding an urgency that is undeniable, the Irish quintet once again effortlessly blends elements of Celtic folk and black metal like no one else. One thing is certain – not only the Czech fans will welcome PRIMORDIAL with a warm hug!
Picking their name from a line in Demolition Hammer’s ‘Human Dissection’, California’s SKELETAL REMAINS not only have proven their exquisite taste when finding the right moniker, but also musically by citing Death, Pestilence, early Gorguts, Morbid Angel and the afore-mentioned NY thrashers as influences. With their insanely good album Devouring Mortality, SKELETAL REMAINS are coming back to conquer what’s theirs on Brutal Assault!
Retro-rock visionaries MONSTER MAGNET spent much of the 1990s struggling against the prejudices imposed upon the image and sound by alternative rock fashion nazis. In fact, it wasn’t until that movement’s late-’90s decline that the band’s dogged persistence finally paid off and their fourth album, Powertrip, catapulted to gold sales status on the strength of its massive hard rock hit “Space Lord.” In the meantime, MONSTER MAGNET managed to become one of the most successful and influential bands associated with the so-called underground “stoner rock” scene. Nowadays, it seems a little bit off to call them underground band, since these guys are a huge deal.
All thrashers, beware! DEMOLITION HAMMER are coming to set things straight in the fortress! New York City’s one of the best thrash acts are back with a helluva record Tortured Existence, which shows the band in their best shape!
An absolute honor is to announce legends of psychedelic rock, Chicago based act full of witchery and surrounded by mystical magic – COVEN! This is the first band which brought sign of horns to metal music. The first band using occult lyrics and singing about satanism and the first satanic band which had a big song in charts. Jinx Dawson spawned COVEN in late 2016 with a new line-up to arrange more sabbaths all over the world and we are pleased to say that one of these magical sessions will happen on Brutal Assault!
Back in the day, a claim was made about the HELLHAMMER, that this band will never come back, because it’s absolutely impossible to reform a band so closely linked to a very specific and unique time period. However, here we are, standing before something that will remind us of these times – Tom Gabriel brings us TRIUMPH OF DEATH! It is a project with an open end. Apart from vague considerations to, perhaps, release an occasional live EP, Triumph Of Death will not record any new music but is solely dedicated to performing both well-know and obscure Hellhammer songs.