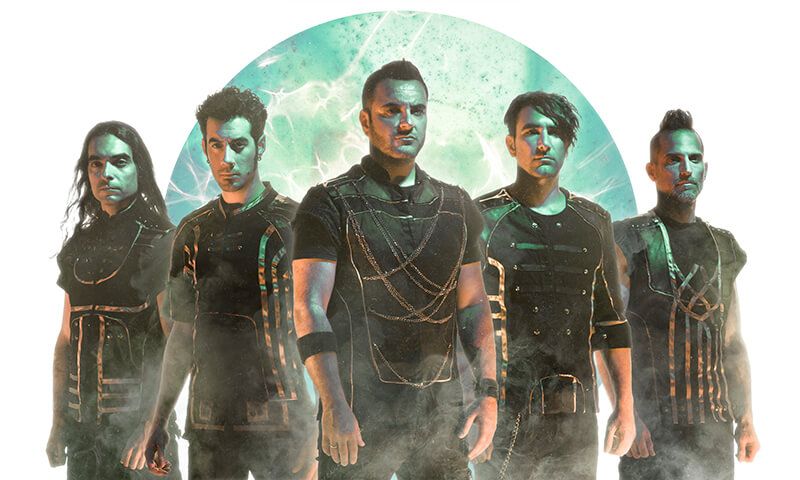 Greek modern metal five-piece SCAR OF THE SUN have reached the next level with the brand new release of their otherworldly third full-length, Inertia. The album delivers a fresh take on melodic, atmospheric, often progressively-influenced metal while forging a unique path, and acts as a follow up to their self-titled demo (2005), debut full-length A Series Of Unfortunate Concurrencies (2011) and sophomore offering In Flood (2016).

We sat down with singer Terry Nikas to find out more about this album, music in general, and much more.

Hi and thank you for talking to us.

Hello there! It’s our pleasure and thank you for your interest!

Congrats on the new album. How are you guys feeling now getting so close to the release?

Thank you very much, hope you enjoyed it! We are very happy to see the album being released finally! It has been ready for a couple of years, we delayed because the deal with Napalm Records took some time to complete, plus everyone is trying to delay their releases due to covid. So after all this wait, we are really thrilled that this album will be out there and we will be able to go forward!

I loved listening to the lyrics and that you had such a story behind them, albeit a very dark one. What lead you to go down that path and dig deep for the pain and anger and troubles and put that into song?

I didn’t choose to write about these matters, these matters chose me really. These are everyday events that happened not only to Greece, but also in other countries. The problem is that we are forced to accept them and pretend that nothing happened! Well, it did happen! When you see 10.000 people jumping of off buildings, a skyrocketed unemployment that reached 30%, 80 year old people that used to have a decent life in the past but now they are searching the garbage for food and many, many more, you cannot be indifferent. We are in 2021 and we are sending spaceships to Mars, but people on earth are starving. This makes no sense for the “crown jewel of creation” as some believe that the humans are.

The Quantum Leap Zero trilogy focuses on real life events from Greece 2015. While it was definitely a situation and period that affected a lot of people, what drew you to it to put it into song?

It was a very, very dramatic situation! It was like war. The European Union shut down our banks, we were searching for ATM machines with money available and there were queues of people in all of them or there was no money left. It was like sudden death, like they were choking us. Then we had for the first time a government that fought for us and we got punished for asking the obvious: to breathe! It was a dark period for us that I really hope we will never get back, but to be honest, we are not out of it completely yet.

Since we’re talking about such important and impactful events, what big world events do you remember from the time you were growing up?

I remember many events such as the Chernobyl case, the fall of the Soviet Union and the impact of it, the first war in Iraq etc, but to me the two most important cases happened in the USA and I only remember the second because I was born -the first one though is equally significant. The first one was the killing of JF Kennedy and the second was the fall of the twin towers in New York City. To me, these two are extremely important because they show where humanity is going. JFK was a problem for the big financial interests, and they killed him in his own country! They did a huge cover up because they just could and because at the time there were no cameras in every phone, internet etc, so they managed to cover their traces. The twin towers also had a huge cover up after the event and the American government used it in order to force new rules that changed the financial balance overnight. All these, but also what happened to Greece in 2015 are coups. There is no democracy, elections are just fancy events to show that we have a saying. Well, we actually don’t!

What are some of the causes you not just believe in but are actively involved in, outside of the band and album?

I see myself as an ecologist, so whenever I have time I am trying to be involved in actions. I am not an activist, but I would love to have the time and the financial stability to be. I also love dogs, I have been involved many times in saving stray dogs and in several actions about stray dogs. I would also love to be able to have a huge farm to host stray dogs and just go every day there to take care of them and play with them. This is how heaven seems in my eyes.

What are the events or experiences you think build you guys the most as a band and made you stronger together?

First of all, we have the same line up for the last 11 years. We did all our tours together, so this and the condition of our first tours bonded us together. The main thing that made us stronger together was the endless rejections we got until we managed to get this deal with Napalm Records. Most bands quit, for us this was not an option. Every time we had a serious rejection it was taking us down, but then we were gathering up our strength and we were going forward trying to be stronger and better. As you can imagine, the fact that the same 5 people insisted and persisted all these years, through some very difficult situations, both in the band but also in our personal lives, made us strong together.

When did you decide you wanted to pursue music seriously? Were there moments when you almost gave it up?

I always wanted to do that and be a professional musician. I loved music since I was a kid. When I formed the band though, the plan since day 1 was to do it on the top level. No compromise and many sacrifices until we make it. After one point there was no other option for me really, I felt that if I don’t make it, I will be a failure in my life. There were times that I thought I should quit. I was thinking that if we will release 2-3 more albums without doing steps forward then there would be no point of trying, in a sense that you cannot reach a certain age and still send demos to record labels in order to take you seriously. It would be a matter of dignity you know. But I am really happy we managed to do the next step right on the right moment, so all good, hahaha…

What is your favourite town among the ones you’ve toured in?

I don’t have always time to go around on tours unfortunately. Sometimes you cannot even move around because the venue is in an area that is far away from the area you can go out and have a coffee and walk a bit. I would say that Porto was an amazing place to have a day off on a tour because you can walk around and just sit in a very beautiful scenery, especially if it’s close to summer that you can sit outside. Barcelona is another city I really like, and I have a good time every time I have the chance to go around. I would definitely love to have more time to see many places better.

Most people I know, me included, absolutely hate hearing their recorded voice because it sounds nothing like it sounds in their head. How do you deal with that as a singer?

Hahahaha… I know what you mean. Well, many huge singers had that problem like John Lennon that absolutely hated his voice and he was doing anything he could in order to hide it under production tricks. Many people also don’t have the opportunity to record their voice on high quality equipment, let alone mix it nicely. Most people listen to their voice on the phone sometimes, recorded on a phone recorder. I don’t have any of these problems. First of all, I can record on expensive and high quality equipment and mix it nicely but anyway I like my voice a lot, even if it’s recorder on a normal phone, hahaha…

What do you do to spark your creativity? What does being creative mean to you in particular?

Lyrics come to my mind all the time! I have much more to write about than just ten songs every time we make an album. I am inspired by everyday life and the planet goes so wrong, so I get endless inspiration. Also, when I listen to music my brain directly reacts in a positive way and I get ideas about songs. Outside of the band, I have many things that I love doing and I could do much more if I had time. For example, I love working with wood and make treehouses and structures. I find it so creative! I don’t do something to spark my creativity, I guess I am lucky that this thing comes naturally to me. Creativity means being alive! I couldn’t just have a 9-5 job without any purpose in life other than the weekend and the 3 weeks holidays during summer! I would die if I had to work to a bank, hahaha…

Something very particular to the last year was having to deal with a lot more “me time” in lockdown. How do you deal with boredom?

The lockdown was weird! The first part last year, when everything started, I stopped working (I am a sound engineer and I have my own studio). All work stopped. For me being a very busy person, it felt weird at first, but then I was happy because I had time for me and my family! I was totally stressed about the financial aspect at first but eventually I started working again after 3 months. I ended up having the busiest year at the studio, probably because all musicians find time to record and mix. I had no touring though, so I had more time at home, but there were a few months that I was all day at the studio. Still I had more time for myself, but this was good because I have two baby sons, so I had the chance to enjoy them and stay with my wife at home more than before. Family is number one for me, so I managed to spend more time with them. Also, being a father of babies is a full-time job, as a result, I didn’t really have free time, hahaha…

Hmmm.. This is a tough question, simply because they are too many to choose from! I would say probably the song Somewhere Far Beyond from Blind Guardian. This is really really hard to say, I can make you a list of 100 songs from the 90’s and still not be completed, hahaha…

Thank you very much and stay safe!